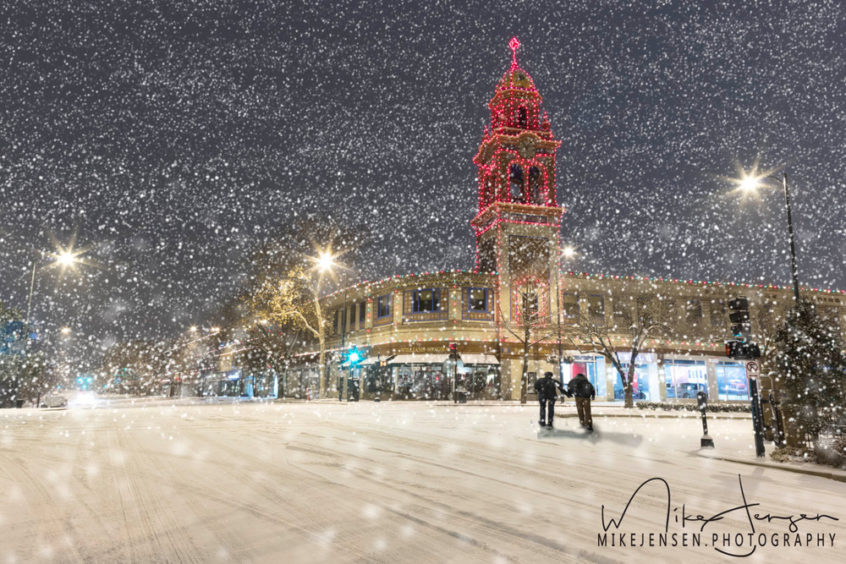 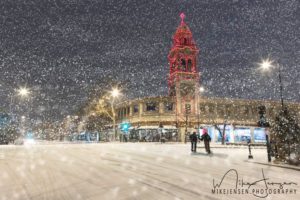 Here’s some great tips for both newbies and more advanced photographers for getting great shots during Winter and in the snow!

Winter can be cold, that’s for sure!  But there are some epic opportunities for great photographs if you’re willing to add an extra layer and learn a few things about how to shoot in this most beautiful time of the year!

Here’s a few suggestions for getting great shots during the Winter months.

In photography, the golden hour (sometimes known as magic hour, especially in cinematography) is the first and last hour of sunlight during the day when a specific photographic effect is achieved due to the quality of the light.  In this magical photo above the color derived from the sunrise only happens at SUNRISE!  So, if you want great shots, get up early!

While winter can be a beautiful time of the year, it’s much harder to capture eye popping photos. The landscape is no longer green, trees are barren, and overcast skies can make everything look hazy. Many photographers will convert images in to black and white to counter the lack of natural color. However, you can find color if you look. Sunrises will create wonderful oranges and pinks over a landscape. Clear skies will look brighter when they contrast with a drab landscape. There are plenty of places to find color, just be patient and scout for it.  The image above was created at Crater Lake National Park during one of my National Park Artist In Residence appointments.  The wind brought in a fog over the lake just as the sun came over the horizon.  Everything was fogged in!  But, I waited!  About 4 minutes in to the fog the sky and the fog started to turn orange and then red.  AWESOME! 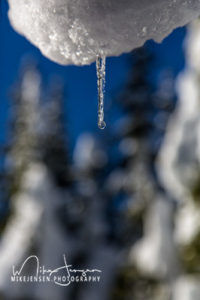 Step 3: Use a Polarizing Filter

A polarizing filter is often placed in front of the camera lens in photography in order to darken skies, manage reflections, or suppress glare from the surface of lakes or sea. Since reflections (and sky-light) tend to be at least partially linearly-polarized, a linear polarizer can be used to change the balance of the light in the photograph. The rotational orientation of the filter is adjusted for the preferred artistic effect. For modern cameras, a circular polarizer is typically used, this comprises firstly a linear polarizer which performs the artistic function just described, followed by a quarter-wave plate which converts the now-linearly polarized light into circularly-polarised light before entering the camera. The additional step of converting the light to circular polarization avoids problems with auto-focus and light-metering sensors within some cameras, which otherwise may not function reliably with a simple linear polarizer.

Step 4: Dealing with the Weather 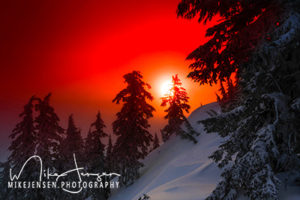 While some cameras are designed to tolerate cold weather well, batteries and lenses are not. Lenses can fog up, optical zooms may not work, and LCD screens can react strangely. Battery life can also be shortened when the temperatures are low. To combat this, there are several things you can do. Carry the camera inside your jacket or an insulated bag/backpack if possible. This will keep it close to your body and won’t allow it to become as cold. Only take what you need in your backpack. Many photographers will choose to use silica packs to absorb moisture when they are in cold climates. This will help prevent the lenses from fogging, and will keep your equipment dry.
You can also use plastic zipper bags to store your lenses and other equipment. The zipper will help lock out condensation, also preventing fogging. Try to avoid viewing the photos on camera until you are back in a warm environment. If you are shooting while it’s snowing, you want to protect your equipment from the melting snow by using a rain cover. You can purchase these for both your camera and lenses at most camera equipment specialists. Remember to pack extra batteries as well, since the battery life will be shortened in colder conditions. 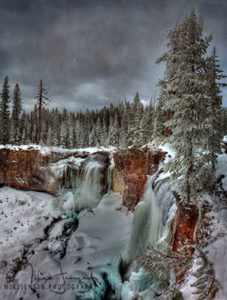 Snow can change the appearance of a landscape or area dramatically. It also opens the doors to many photogenic outdoor activities from building snowmen to skiing. Snow and ice also offers many opportunities for close up and abstract images.
Before even thinking about camera gear or anything else to do with photography, prepare yourself first, especially if you are unfamiliar with snow conditions. In many parts of the world where snow is a regular feature, especially here in Central Oregon.  Conditions can change dramatically in a short instance. What may start out as a sunny day could quickly turn to blizzard conditions. The temperature will drop drastically as well once the sun goes down. 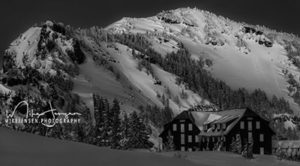 It is vital to stay warm and dry, especially if you plan long periods out of doors. Many layers of light clothing is more effective than one or two heavy layers. Waterproof outer layers are vital. Gloves, preferably waterproof, are also essential even though they can often hamper the use of photographic equipment. Numb fingers though will also prove useless in handling a camera! The risk of camera shake obviously increases as we are inclined to shiver.
When walking or hiking in wilderness or mountainous areas, stick to designated paths or roadways, DON’T wander into unmarked open areas. Snow can often build quite high, known as drifts. These can cover very uneven ground, even deep gorges, to look like level areas. One could fall

through becoming injured or trapped to say the least. Get advice from local officials if you aren’t familiar with the area.
On sunny days it can become quite warm, despite a good layer of snow on the ground. It may sound odd but a facial sun block and sunglasses is also a consideration if you plan long periods outdoors. Ask any skier and they will tell you that getting sunburned is a real possibility. Glare is also a major factor as the sun reflects strongly off the snows white surface. 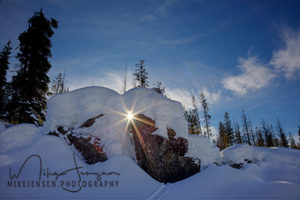 Exposure Technique
Most camera light metering systems can have difficulty exposing a snowy scene correctly. Camera meters read the light that is reflected off the subject they are aimed at. In most situations where there are many shades and colours present in a scene, this poses no problems and a correct exposure is easily achieved by the camera. This is because a cameras meter may read off many different areas in a scene and is primed to average out areas of equal darkness and lightness. However when a scene is mainly made up of one colour or shade, metering problems can occur.

The colors or shades that pose the most problems are black and white. Metering off a mainly black or very dark colored scene will fool many meters

into assuming that there is very little light, despite the presence of strong lighting. Therefore the image will become overexposed, turning blacks to murky greys. Scenes with mainly white coloring or shade cause equal difficulties, this time though the meter assumes that there is more light present than there actually is, even when light levels are quite low. This leads to underexposure and what is meant to be white in shade also appears as a murky shade of grey in the final image.

Snow of course is white and can reflect much more light than other colors, this could lead to the image underexposing. Instead of crisp white snow appearing in your image, you could be confronted with a murky grey appearance of snow and darker colors and areas in the image losing detail or being blacked out. Now before we go any further it must be remembered that there must be a certain amount of snow in a scene before an incorrect reading may come about. Just because there is a snow capped mountain in the background of your scene, doesn’t mean it will lead to an incorrect exposure.

Please feel free to contact me if you have any questions.